An ROV technician received an electric shock to his left arm beneath the elbow, resulting in a burn. ROV personnel were working in the technical workshop completing a non-electrical related task, bleeding air on top of the HP filter housing from the main hydraulic circuit, when the technician received the shock. The ROV single phase power was energized, but the area of the ROV (Phase 3) that was being worked on was isolated, de-energized and locked out. 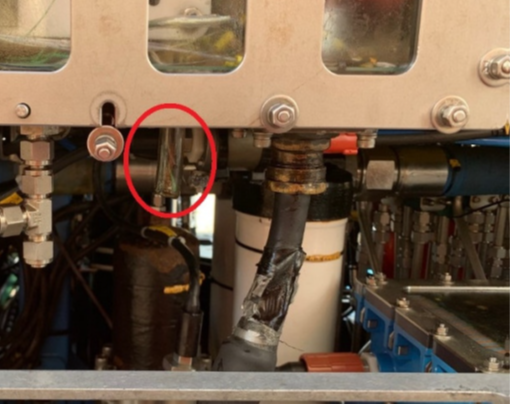 Investigation established that a water drain tube had been used as a conduit for an electrical cable, both the drain and electrical cable had been cut in half, but it was unclear whether or not the cut happened during demobilization, transit, or during the skid and ROV segregation in the technical workshop. The cut cable exposed live electrical wires. Once the cut wires were isolated, personnel were able to identify that they were connected to a separate transformer, and thus the wires were found to be live even after isolating and locking out the area of work.

The system had been recently demobilized from a project. The routing of the electrical cable through the water drain was a modification to the system that had not been documented, communicated or handed over to workshop personnel after the ROV was demobilized. The electrical cable, which had been cut, exposed the bare wires rather than being disconnected and removed.