A DP2 cargo vessel was working close to a pipelaying vessel conducting cargo operations in a drift off position.  The current at the time of the event was 2.5 knots which, in conjunction with 10 knots of wind, resulted in an external force of 30 tons acting on the port quarter.

With no aft thrusters available, the vessel drifted for around 200m before power was regained to one of the starboard steering pumps allowing the thruster to restart.  The vessel was subsequently manoeuvred outside the 500M zone for failure investigation. 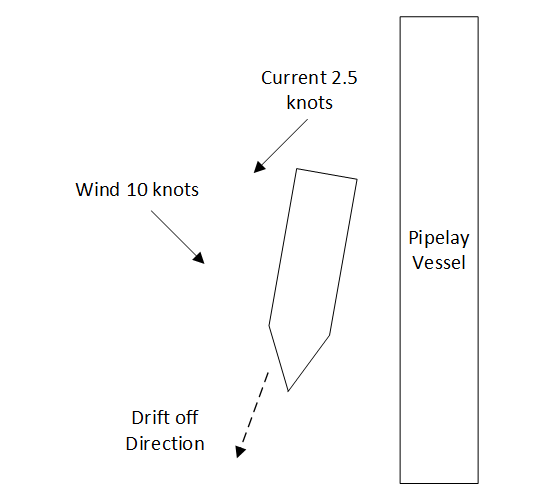 At the time of the event, the vessel was being operated on automatic DP2 mode, with 4 generators and 4 thrusters online.  The main 690V, 440V and 220V switchboards were being operated with open bus tie; each side of the main switchboard powering one forward and one aft thruster as per the proven redundancy concept. 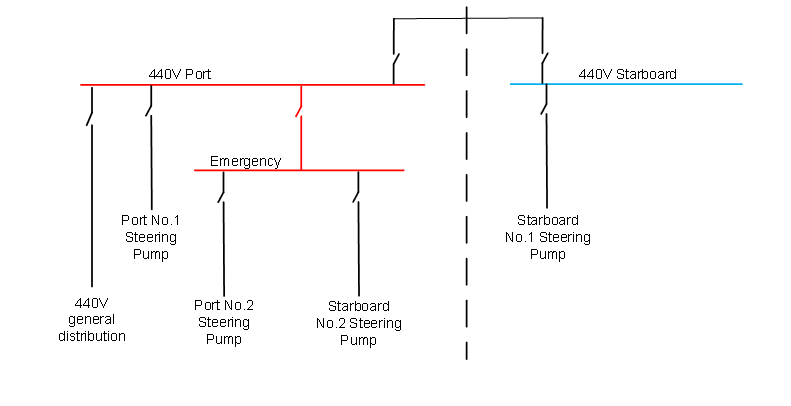 The investigation revealed a gradual but significant earth fault within a consumer supplied by the Port 440V general distribution panel.  The Earth fault was caused by a trapped cable within a motor connection box.  The cable had been trapped between the lid and body of the box during a recent maintenance inspection.

This earth fault had been detected by the sophisticated protection systems of the VSDs controlling the steering pumps on the port and emergency switchboards, but not the starboard switchboard as the bus tie was open.  The VSDs tripped causing the three steering pumps to fail.  Note that the VSDs are unable to differentiate whether an earth fault is upstream or downstream, therefore they will typically trip assuming that the earth fault relates to the equipment they control.

This case study demonstrates the challenge that exists when there is a classification rule requirement to install secondary equipment and supplies from the emergency switchboard, and the subsequent risks that the DP system design is then exposed to from a common mode/single point failure/cross connection perspective.

Such factors should be analysed within the vessel’s DP FMEA.  Analysis should then be confirmed through FMEA proving trials and subsequent DP Annual Trials Programmes with any necessary mitigating measures (technically or procedurally) put in place.

The following case studies and observations have been compiled from information received by IMCA. All vessel, client, and operational data has been removed from the narrative to ensure anonymity.

Case studies are not intended as guidance on the safe conduct of operations, but rather to assist vessel managers, DP operators and DP technical crew in appropriately determining how to safely conduct their own operations. Any queries should be directed to IMCA at dpreports@imca-int.com. Members and non-members alike are welcome to contact IMCA if they have experienced DP events which can be shared anonymously with the DP industry.