Incident 1 – Near miss: use of fall arrest devices during CTV personnel transfer

Whilst transferring personnel to a wind turbine generator tower during the hours of darkness in the winter months, a CTV was pushed onto the boat landing for approximately 10-15 minutes. During this time two persons were transferred safely. As a third person clipped on to the fall arrest device, a rogue wave hit the vessel. It was dark and the wave was unseen and unexpected. It lifted the CTV at least 4 meters up the boat landing. The crewman assisting the transfer instructed the transferee to quickly unclip from the fall arrest device to prevent himself from being picked up off the deck. He was able to do so, and the vessel quickly dropped to its previous level on the boat landing.

The Master immediately notified the company of the incident and stopped transferring personnel until there was an improvement in sea state and/or visibility. In due course the Master was happy that the safe transfers could resume, and operations continued without further problem.

The client issued a safety notice warning of the imminent worsening seasonal weather in their newsletter – this included additional instruction for CTV transfer during marginal weather conditions.

A CTV was requested to attend a wind turbine generator monopile to transfer some personnel, whilst a construction vessel was nearby in dynamic positioning (DP) mode. The personnel were successfully transferred to the foundation, but as the Master activated astern gear and pulled away from the monopole, the CTV went through the thruster wash caused by the construction vessel (which was in DP mode). This caused the CTV to move in an unpredictable and uncontrollable way – the CTV passed within 4 metres of the construction vessel itself. 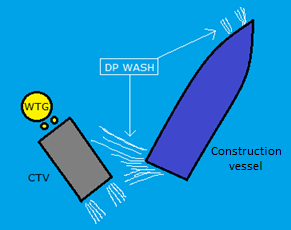 Construction vessels holding station using DP are now in common use in the offshore renewable industry; these vessels, which are much larger than crew transfer vessels, operate in DP mode whilst navigating close to a wind turbine generator monopile. It is not always possible for the construction vessel to move further away from the monopiles as they are generally constrained by subsea equipment such as cables, survey gear and construction equipment.

The client required that procedures be reviewed and reconsidered:

Members may wish to refer to the following similar incidents (search word: CTV):

The issue of where and how to safely attach personal fall protection during transfer from one vessel to another, is one that is currently of great interest to IMCA and its members within the renewables sector, as this kind of incident has been reported several times to IMCA in recent years.

Members may wish to refer to Guidance on simultaneous operations (SIMOPS).