IMCA has received details of an incident which occurred offshore during concrete mattress installation. Divers were positioning the mattresses in approximately 37 feet of water.

As a diver confirmed that the last mattress in a spread was centred over the proper location, he called for the crane to lower the load. When the initial weight of the mattress was off the handling frame, an unexpected vessel motion caused by swell forced the frame to move towards the diver and into the side of his helmet. The diver’s helmet was penetrated above and below the diver’s left ear by a piece of angle iron protruding from the middle of the mattress installation frame on the opposite end from the release lever.

The diver had been bending over, attempting to move the mattress into position, with his right arm resting on two previously installed mats behind him. The protruding piece of angle iron was one of several remnants of reflector mounting brackets that had inadvertently been left in place from a previous job.

Besides the damage to the diver’s helmet, the diver received a bruise to his shoulder/forearm when he was caught between the swinging mattress frame and the previously installed mattresses. Had the piece of angle iron further penetrated the diver’s helmet, or had the diver’s head turned in a different direction, the incident could have resulted in a fatality. 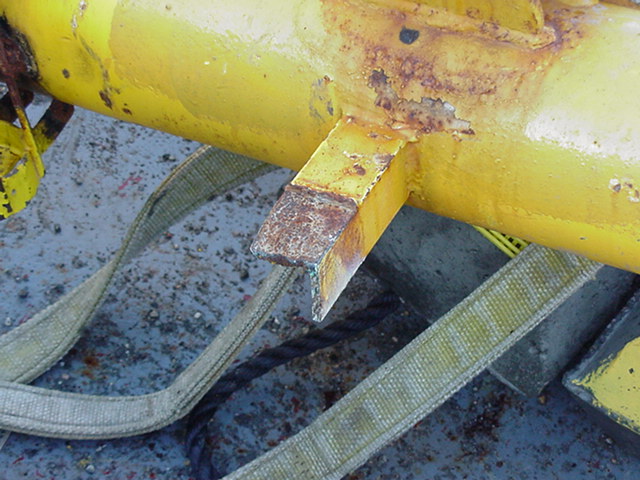 This near miss demonstrates that, regardless of how often a task has been performed in the past, or on a given worksite, or by a very experienced diver, lowering of loads must always take account of vessel heave effects. This incident was further complicated by the fact that the mattress installation load was a ‘two tier one’ – essentially one load (the mattress) slung under the other (the installation frame). When the first load landed, the other would still be free, and likely to be heaving in unison with the ship. It could possibly rotate and be above or close to the diver.

As the diver had, as a matter of necessity, to focus on the correct positioning of the mattress, it would have been difficult for him ‘to keep an eye’ on the handling frame. This would not be helped by the fact that, as the mattress dropped into position, it would stir silt and impair in-water visibility.

The investigation also identified the failure to recognise and assess the hazards associated with the protruding angle iron by the diving crew during mobilisation for the project. However it must be borne in mind that even a ‘smooth’ frame could have stuck the diver causing injury. The following actions resulted:

The following key points have also been stressed by the company involved: