The UK Marine Accident Investigation Branch (MAIB) has published its interim report into a serious explosion and fire on-board the chemical tanker Stolt Groenland on 28 September 2019 at Ulsan in South Korea.  The incident occurred during ship-to-ship transfer of highly flammable styrene monomer, one of 20 different chemical cargoes the vessel was carrying in 37 of its 39 cargo tanks.

At 1043, vapour started to release from a pressure vacuum valve for the tank which contained styrene monomer.  About two minutes later, a high-level alarm indicated that the level in the tank had reached 95%, soon followed by a ‘high-high’ level alarm indicating that the level had increased to 98%.  By now, Stolt Groenland‘s on-watch deck officer and chief officer had made their way to the cargo control room.

At 1050, two explosions were seen and heard in rapid succession in way of the tanker’s cargo manifold.  The resulting fireball passed very close to a road bridge above the quay.

The fire was fought from the shore and from the water and lasted until the early hours of the following morning.  There was extensive damage to the vessel and a number of crew and firefighters were injured. 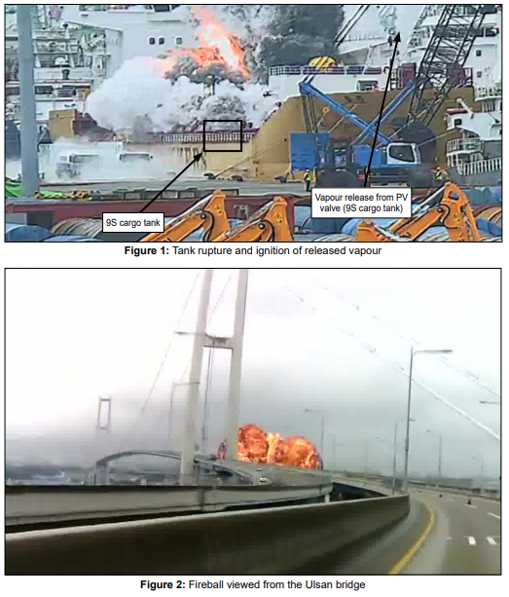 The MAIB’s initial findings were that the explosions were probably caused by the rupture of the deck above the cargo tank, followed immediately by the ignition of the styrene monomer vapour that was then released.  The rupture was due to over-pressurisation and the likely sources of the ignition were static electricity, sparks or elevated steel deck plate temperatures resulting from the tank rupture.

The full interim report can be found here.