A member has provided a report of a diving fatality that occurred during the installation of a 20″ flexible hose (40m long) between a pipeline end manifold (PLEM) and a new buoy in a water depth of 35 metres.

According to the original approved operational procedures a top-hat flange with a valve for flooding was to be installed. Due to the absence of the top-hat flange, a modified blind flange with a valve and pull-eye was to be provided for floating transport and installation of the under-buoy hose. Eventually the sub-sea hose was delivered on location with a blind flange at the bottom end of the hose.

After complete removal of the blind flange prior to the installation, the risk of damage to the flange and O-rings during passage of the anchor legs and skirt of the buoy was recognised. As a quick solution, a solid wooden plate (10mm thick) was placed across the flange at the bottom end of the hose to protect the O-rings. The intention was to remove the wooden plate immediately after passage.

The diver, who had installed the snatch block and guided the wire at the PLEM, reported a lot of tension on the wire and noticed during the first in water decompression stop, that the wooden plate was still in position. The diving supervisor asked the deck-crew to make preparations for flooding of the sub-sea hose from topside.

After reaching the bottom end of the hose, the diver tried to remove the plate with his knife, but due to the high suction forces involved, he broke his knife. The force holding on the wooden plate was likely to have been approximately 2 tonnes.

The diving supervisor, who was aware of the danger, told the diver that preparations were being made to flood the hose from the topside and in combination with slack on the wire the differential pressure would be eliminated. The diver was warned to stay well clear of the bottom end of the hose.

Meanwhile the diver took his broken knife blade and with his hammer he punched the plate. At this stage there was a loss of communication with the diver and there was a fast payout of his umbilical. See sketch. 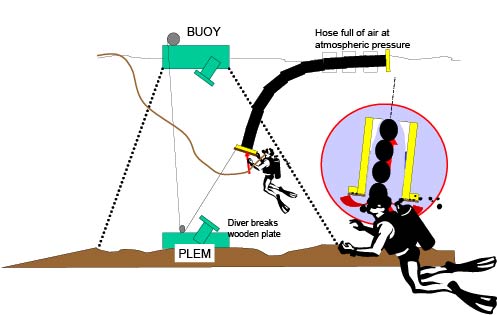 The umbilical was recovered to the surface along with the diver’s Kirby Morgan 18 bandmask. The bandmask was damaged but intact except for the video camera which had been smashed off. Also hooked to this equipment was the ring shaped remnant of the wooden plate. Diver rescue procedures were then launched. After a little time searching the diver was found. He had massive head injuries. Death was evident.

Management and SHE-Q representatives from the client group and the contractor immediately launched a detailed investigation into the accident, and produced a joint report. The immediate cause of the accident was the loss of integrity of the wooden plate which then allowed a sudden flooding of the flexible hose. The diver was sucked into the pipe end by the rapid inflow of water.

The basic causes of the accident were identified as:

After the accident the company recommended that each affiliate review its current arrangements, as follows: