he following incident report has been received via the IMO Sub-Committee on Ship Design & Equipment. Although the incident itself is not very recent, the full details have only just been made public. It is worth highlighting because it underlines the importance of keeping a careful check on the structure around the parts of a vessel which are subjected to great forces, such as mooring fairleads. This is especially the case with an aging of heavily worked vessel, despite one which is ‘in class’.

The incident concerns a vessel built in 1982, with an overall length of just over 105 metres and a gross tonnage exceeding 3,800. There were four fairleads on the forecastle deck, two on each side (the ‘shoulder’ fairleads). The fore fairleads consisted of three 200mm diameter rollers and a baseplate measuring 500mm wide by 1,600mm long by 12mm thickness. The ISM shipboard safety inspection manual required that the operating condition of the fairleads be checked every three months. When they had been checked approximately 2 months before the incident, the chief officer had found them to be in apparently good condition. 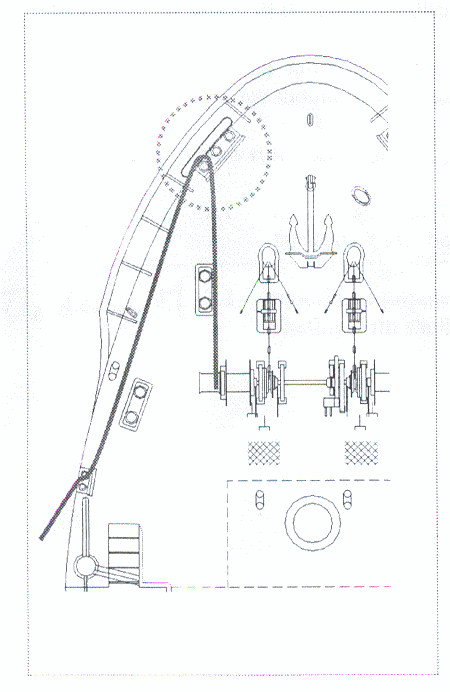 The vessel had berthed alongside a pier, letting go its starboard anchor with three shackles in the water to the direction of 3 o’clock. Every mooring line, except a bow spring line, was made fast to the shore bitts through each appropriate mooring hole or each fairlead. However, the bow spring line was connected to a shore bitt via two fairleads, in order to prevent the line from chafing against the shell plate, i.e. the spring line from the winch was taken forward to the fore fairlead, around a roller of the fore fairlead to the aft fairlead, then out to the shore bitt (see figure). The mooring lines were polypropylene fibre ropes with a diameter 65mm.

The vessel was departing the port in fine weather and with calm sea conditions. The chief officer was watching the anchor chain tension, the boatswain was behind the windlass, operating the controls, and the other members of the deck crew were beside the port side fairlead, stowing the mooring lines away. The Captain ordered all lines to be cast off, except a bow spring line, then ordered hard-a-port steering and ‘dead slow ahead’ for about 10 seconds.

The torn base plate of the fore fairlead was inspected thoroughly after the incident. One third of the welded part was rusted and cracked, even though the apparent condition had been good.

Fairleads are generally used to change the direction of the mooring rope when there is an obtuse angle from a ship to a pier. However, any unconventional mooring line arrangement that shortens the angle crates much stress on the fairleads and causes potential hazards. Therefore, established rules regarding the proper use of fairleads and the strength of supporting structures are needed. Clearly, structural components subject to high stress loadings need careful and regular inspection and the design of mooring equipment should be arranged so as to prevent lines from chafing with shell plates.