A member has reported an incident in which a diver sustained an injury to his hand. The incident occurring during diving operations that were part of the installation of mooring chains for a catenary anchor leg mooring (CALM) buoy.

In an attempt to free a bight of a fouled transfer sling from its pinch point between two mooring chain links, the free hanging eye of the jammed wire rope was secured to a soft line for passing through the link and back to the surface crew on the buoy (see diagram). The intention was for the soft line to be hauled up, with the wire rope to follow. Once the eye had been pulled up to the chain it became necessary for the diver to reduce the diameter of the eye in order for it to pass through the link. Whilst the diver was working to accomplish this, the soft line which had previously been hauled by the riggers on the buoy was attached to a fast tugger winch on the vessel crane in preparation to assist in freeing the sling. The diver was not informed that this change had taken place.

After readying the eye for passage through the chain link, the diver gave the instruction to come up on the soft line. As he was in the process of manipulating the eye 90 degrees to ease its passage, it suddenly shot through and pinned his wrist against the chain. The diver immediately requested slack, but after a few seconds of increasing pressure on his wrist he opted to cut the soft line and free himself. After he returned to the surface, examination of his wrist on the vessel indicated no traumatic internal damage. The diver was sent ashore for x-rays to rule out fractures. He has since returned to work after a period of recuperation. 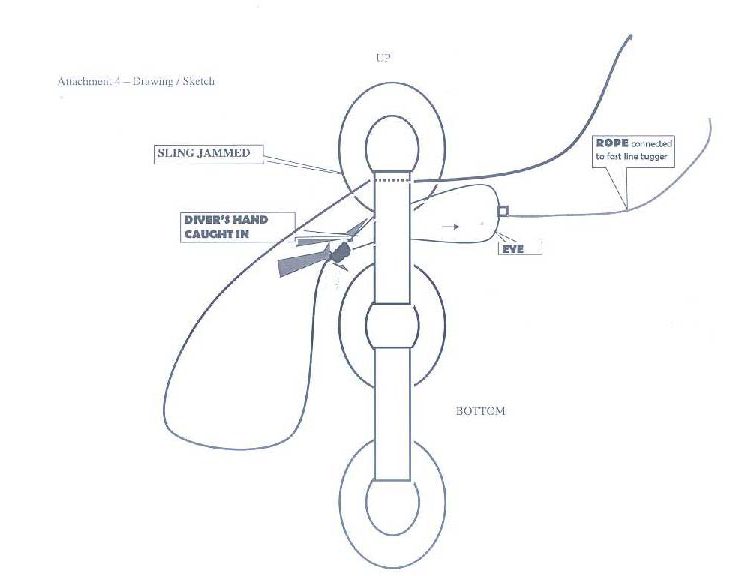 The company noted the following: