An ROV vessel was engaged in subsea operation undertaking routine inspection, repair and maintenance (IRM) work.  While an inspection class ROV was being recovered to deck within its tether management system (TMS) via an over-the-side hydraulic LARS system, the main lift wire parted and both the ROV and TMS fell to the seabed.  The winch operator immediately informed the ROV supervisor, who isolated the ROV system and went down to the ROV deck to find the bare main lift wire hanging, no longer over the sheave, but in the water from the LARS skid without the ROV attached.  The incident occurred in calm conditions.

The TMS containing the ROV was recovered with the aid of vessel’s divers.  All operations were suspended to investigate the incident, and the system and failed components quarantined to prevent misdirection or incorrect analysis.

During investigation it was identified that no direct imposed load or snagging occurred during the recovery of the ROV TMS system prior to the failure.  This was confirmed by review of CCTV footage. 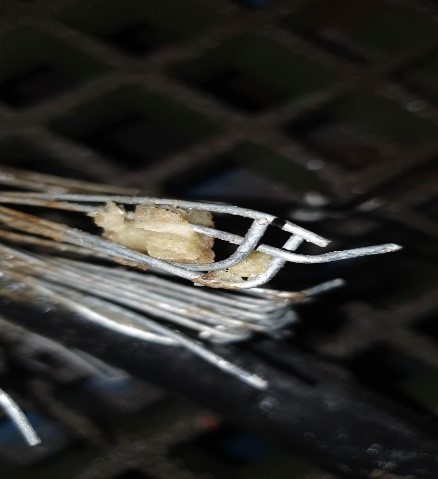 Members may wish to refer to the