A member has reported a number of recent near miss incidents involving the approach of small boats – offshore renewable industry crew transfer vehicles – to wind turbine towers. In both incidents the vessels have become unattached from the boat landing and have then become dangerously close to hitting the monopile when taking avoiding action.

Our member noted that if the Master knew he was about to make a significant steering alteration he should have informed the crewman first to allow him to safely evacuate the transfer platform before the movement began.

Our member’s recommendation was that if a crew transfer vessel moves significantly off centre of a boat landing, the Master should first instruct the crewman to remove himself from the transfer platform and tell him to order the technicians to STOP transfer and standby. Then the Master should pull the vessel away from the wind turbine and begin correct push-on again before recommencing transfer.

A crew transfer vessel was at work in marginal sea/weather conditions that were near to the limit of the vessel capabilities to transfer crew in a safe manner. The Master made the decision to attempt pushing onto a wind turbine boat landing in order to better assess the vessel’s movement. After a short while he quickly deemed the weather conditions too severe and decided to abort the procedure. When the Master put the jet controls into reverse to move astern, only one jet responded. Due to the high engine power being applied to hold the vessel in position against the boat landing, the vessel turned sharply to starboard in front of the boat landing. The Master instantly attempted to use the jog steer back up controls to avoid collision but this was unsuccessful; the port jet would not respond. Next the Master tripped the jet control isolators and re-booted the system. This time all was now working correctly and the vessel was driven away from danger and returned to shore without further problems. Again the crew transfer vessel came within two metres of colliding with the monopile.

Our member conducted a full overhaul of the system but there were no obvious signs of damage or deterioration found. As a precaution to prevent further reoccurrences, the supplier of the jet drives was asked to attend the vessel the next day to perform a second system overhaul and fault finding exercise. After two further days of work on the system, the drive supplier concluded that a worn jet control potentiometer had caused the units not to respond as requested.

This incident is similar to incident 2 above. Within the previous week on another crew transfer vessel the Master noticed the vessel was not steering correctly when on passage to site. Suddenly the steering on both units would not centralise and was stuck hard to starboard, the jet display alarmed with fault code: JS steer fault (joystick).

The Master, under advice over the phone from the superintendent, removed the joystick from the fly bridge steering console and replaced it with the faulty unit in the wheelhouse. All steering was regained. The faulty unit was sent back to the supplier, and under investigation it was found that the steering potentiometers had worn. Our member considered introducing planned maintenance/replacement of such units to prevent recurrence. 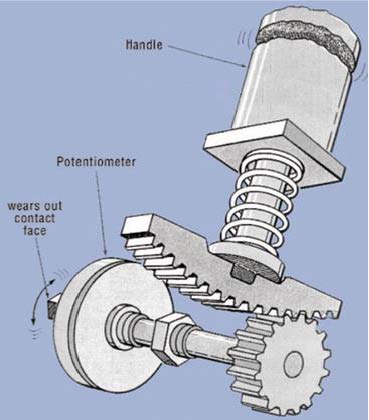 Members may wish to refer to the following similar incidents (key words: renewables):