A member has reported an incident in which a pallet lifting frame suffered a catastrophic failure. Various stores were being lifted onboard a company vessel during a recent mobilisation. A crate, containing a crane motor, was being lifted from the quayside on to the vessel deck; during this operation the pallet lifter being used suffered a catastrophic failure as the lift started. No one was injured.

The pallet lifter had failed at a point on the stem near the forks, where it had buckled through 90Â°. The pallet lifter was disconnected and left on the quayside and the crate re-rigged and successfully lifted onboard.

Personnel involved in the lifting operation failed to inform vessel management at the time of the incident but later a report was made, though this was not received by the relevant vessel personnel until the following day, when an onboard investigation was begun. 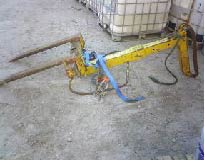 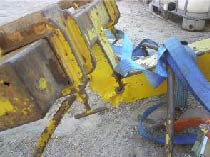 Investigation proved difficult as most of the evidence had been removed. The crate had been sent off with the garbage and the tag indicating the weight of the load was not kept. The weight of the crane motor (the load which was dropped) was established at 1.4Te, proving that the pallet lifter had failed below its SWL of 2Te.

Further investigation of the pallet lifter revealed an area of corrosion on the underside of the forks where a hole had appeared. In addition the small hole on the otherwise smooth plate end of the cross beam indicated that deterioration was taking place inside and working outwards and would not have been evident unless the pallet lifter had been turned on its side. The pallet lifter had been inspected four months previously during the six-monthly rigging inspections and the corrosion was not identified. With the extent of the corrosion, some signs would have been evident during this inspection but were not spotted or highlighted.

Onboard personnel who had been using the equipment had also failed to identify that serious corrosion of the pallet lifter had occurred.

The following conclusions were drawn:

The following actions were recommended:

The pallet lifter inspection records and process were investigated separately as a result of this incident.