A member has reported a serious injury incident which took place recently during planned ‘routine’ crane maintenance operations onboard a third party vessel. 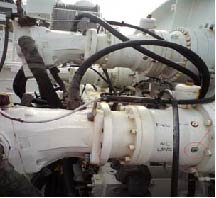 A crew member was carrying out ‘routine’ maintenance on the upper crane platform, checking gearbox and pump oil levels, of which there were twelve to be checked. The oil check involved manually removing a plug. The crew members’ gloves and boot soles became contaminated with hydraulic oil and, when descending the vertical ladder, the crew member slipped on the ladder rungs and fell approximately two metres to the crane cab platform below. During the fall the crew member’s left leg became trapped in one of the lower rungs, causing injury.

Following immediate assistance from the onboard medic and consultation with medical advisers, the crew member was medevaced ashore. It was later confirmed that the person had suffered a fracture of the left tibia.

Working on the upper crane platform was considered to be a ‘routine’ activity and consequently there were no permit to work (PTW) or other working at height (WAH) controls in place.

There were no task procedures in place for the activity and the method of checking the oil levels by removing a plug to bleed the oil was deemed to be unacceptable. Hazards and controls were not properly identified.

The task was seen purely as ‘routine’ maintenance and there was an unchallenged acceptance of the method of carrying it out.

Perception and awareness of the potential risk involved in this task was low. There was:

A ladder access survey did not fully recognise the potential risks around safe access/egress from the upper crane platform. The design of the vertical ladder and its location/position was considered to be inadequate and unsuitable:

This incident clearly had the potential for much more serious consequences and was classified as a HIPO (high potential event). The investigation revealed a number of key learning points which should be shared by IMCA member’s to raise awareness and help eliminate any similar incidents in the future.