During a voyage in good weather conditions, the Captain decided that the vessel would sail with the cranes secured on deck. On the second day of the trip, the Captain was looking at the main hoist block of the forward crane, which was secured at the same height and just behind the bridge, when he noticed a 30cm long piece of 10×10 timber lying on the side of the hook. 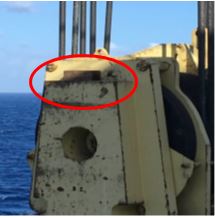 Whilst disconnecting lifting gear from a large piece of subsea equipment, which had been loaded onto deck, it was noticed by the crew that a securing pin on the load was more than half out of position. The lifting gear consisted of a large beam and two further spreader beams. The grommets used for these spreader beams were secured with the securing pin, in turn secured with a safety pin. A few minutes later, the securing pin was touched by a steering line attached to the main beam, causing the securing pin to fall out and drop 15m onto deck. No-one was nearby where the pin landed; the loose pin had been spotted and the area cleared beforehand.

What went wrong? What were the causes

There was no direct force on the securing pin by the grommets. Due to the rigging, the spreader beam was twisted; it was horizontal but twisted some 30 degrees around its axis. This caused the pin to slide out when the safety pin was gone. The safety pin was not found after the incident.

A new kind of safety pin was introduced:

Members may wish to refer to the following incidents

Members may also wish to refer to the following IMCA guidance and safety promotional material: