A member has reported the following incident, whereby a mechanical plug installed inside a pipe to isolate hot work from process fluids released suddenly, striking and killing a welder.

Results from the investigation indicate that the direct cause of the incident was blockage of the purge vent line on the back side of the plug due to freezing water vapour in the line. This allowed pressure to build up and eject the plug.

While freezing contributed to the blockage in this incident, it is not the only means by which pressure can build-up. Given the ‘routine’ use of these types of plugs in production operations, all relevant personnel should be made aware of the events in this incident and a review of isolation plug procedures is encouraged.

The work in this incident involved a welding operation on the open end of a 28-inch produced water line that had residual water and hydrocarbons in it. A non-pressure-containing mechanical plug, known as a ‘plumber’s plug’, had been installed about 12 inches inside the pipe, as a barrier against process fluids and purge gas. About three hours before the incident, a nitrogen purge was established through a fitting in the plug to inert the pipe area behind the plug. The nitrogen came from a nearby supply header operating at 25-30 psig. The purge gas was routed to the plug from the header via a Â¾-inch flexible hose. Another Â¾-inch hose was connected to the top of the pipe behind the plug and routed outside the module to vent the vapors. The ambient temperature was 0Â°F at the time of the incident. A hand valve was used to pinch the flow of purge gas from the nitrogen header. There was no pressure gauge, regulator, or secondary relief on the purge to allow pressure to be checked or to prevent pressure build-up. A job safety analysis (JSA) recognized the potential hazard of the purge line freezing. To mitigate the risk, the line was checked periodically for flow by placing a hand at the end of the vent hose. This check subsequently proved to be inadequate. When the vent line froze, the pressure build-up behind the plug caused the 63-pound plug to release suddenly, striking and killing the welder and inflicting minor injuries on two other workers.

The primary lesson learned is recognition of the risk associated with potential pressure build-up behind plugs that are not intended to hold pressure. When purging systems using such plugs, procedures should address the size of inlet and vent hoses, placement of vent hoses, use of regulators to control flow, use of secondary pressure relief to prevent overpressure, positioning of workers away from the plug, and work crew training and hazard awareness. Where possible, the best option is to design tie-ins so that isolation plugs between hot work and hydrocarbons are not needed. In addition to the ‘plumber’s plug’, the company involved is evaluating alternative plug types when isolation is needed. These alternatives include double-sealing hydraulic plugs (Car-Ber type) and pressure rated plugs (Thaxton) that have the potential to be used with or without purging.

The investigation report also identified potential issues with JSA and lesson learned processes at the work site. While the JSA had identified the vent freeze-up hazard, the risk had not been properly mitigated. In addition, the crew doing the work was not directly involved in the JSA. A similar near-miss occurred earlier in the year when a 4-inch plug blew out due to a malfunction of the pressure regulator on the purge gas. Lessons from that event did not get incorporated into existing procedures.

The company is reviewing its JSA and lesson learned processes as described below and has sought examples of best practices and lessons learned from its employees’ experiences with use of such plugs for wider sharing. 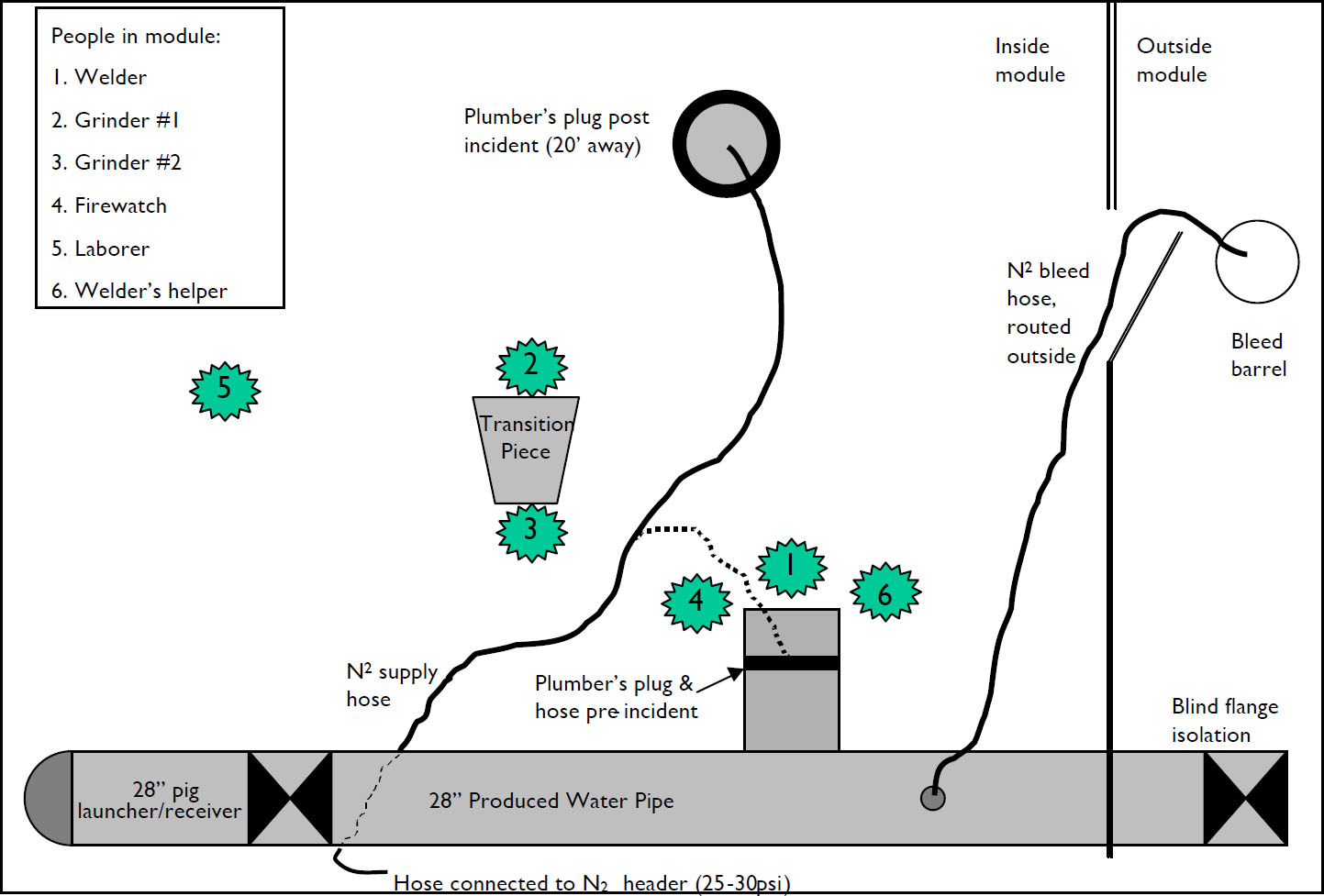 The company has provided the following summary of actions and lessons learned following the incident: