The HSE is reminding companies of the necessity of monitoring workers’ health after an organisation was fined for exposing six maintenance team workers to Hand Arm Vibration Syndrome (HAVS). This was discovered following a health surveillance programme.

Hand Arm Vibration Syndrome (HAVS) is a serious and permanent condition caused by regular and frequent exposure to hand-arm vibration. HAVS results in tingling, numbness, pain and loss of strength in the hands which may affect the ability to do work safely and cause pain, distress and sleep disturbance.

Members may wish to refer to the following similar incidents:

Members may wish to refer to the following incident:

Investigation found that the company had failed to ensure the work to clean the metal shafts was carried out safely. It wasn’t an isolated incident and their employees had been applying emery cloth directly by hand on the lathe for several years prior to the accident.

The HSE Inspector said that this employee “suffered life changing injuries in an accident that could have easily been prevented. The risks involved with applying emery cloth by hand on metalworking lathes are widely known and the company should have done more to ensure that they carried out the work in a safe manner.”

This incident is identical – save only the outcome which was worse in this case to the August 2017 incident:

A worker suffered crush injuries from trapping his hand in an unguarded printing machine. An employee was injured when his hand was drawn into the print rollers while he was attempting to clean the running machine resulting in partial amputation of two fingers.

Investigation found that the lack of guarding on the machine was the root cause of this incident together with a lack of training and supervision.

The HSE inspector said “This case serves as a reminder to industry that planning and guarding of machinery requires regular reviews and monitoring to ensure workplace safety. The need to review machinery guarding is a positive benefit to improving workplace safety”.

Members may wish to review the following incident: 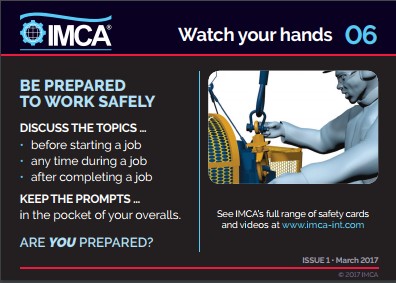 Members are encouraged to bring to the attention of their crews, The IMCA safety promotional materials on hand safety and other topics, available free to members here.