There have been two recent incidents of serious harm in the Asia-Pacific region caused by the catastrophic failure of self-contained underwater breathing apparatus (SCUBA) cylinders manufactured from aluminium alloy 6351. As a result of these incidents in August 2017 WorkSafe New Zealand issued a Safety Alert entitled “Cylinder design approvals withdrawn“.

In its Safety Alert WorkSafe New Zealand announced that it had decided to withdraw approval for SCUBA and self-contained breathing apparatus (SCBA) cylinder designs which used aluminium alloy 6351. The withdrawal came into effect from 31 October 2017.

The publication of this bulletin was prompted in part by the Asia-Pacific incidents, but also by an incident of serious harm caused by the failure of an HE30/AA6082 cylinder in England in 2017.

Failure to conduct such inspection and testing could result in serious harm.

Cylinders to be inspected and tested include those used for SCUBA diving, those that supply breathing air through an umbilical hose and those used to fill SCUBA cylinders.

If you are unable to determine whether a particular cylinder is made from one of these alloys, remove it from service, safely release the gas and do not use it until the alloy can be identified and proper inspection and testing can be conducted.

In view of the information provided by the Worksafe New Zealand alert and the UK HSE bulletin, IMCA recommends that cylinders manufactured from aluminium alloys HE30/AA6082 and AA6351 are not used on member worksites.

Members are advised to take the following actions:

The WorkSafe New Zealand Safety Alert contains a list of cylinders affected by the withdrawal of WorkSafe cylinder design approvals. This has been reproduced overleaf as a means of assisting members to identify affected cylinders.

Cylinders stamped with any of the following markings are manufactured from HE30/AA6082 or AA6351:

Note: On some small cylinders manufactured at Luxfer’s Aldridge, England, plant, the above markings may not be present. In that case, the alloy can be determined from the three-digit type number stamped around the base. If the three-digit number is of the form 1**, 3** or 5**, then the alloy of manufacture is AA6351. 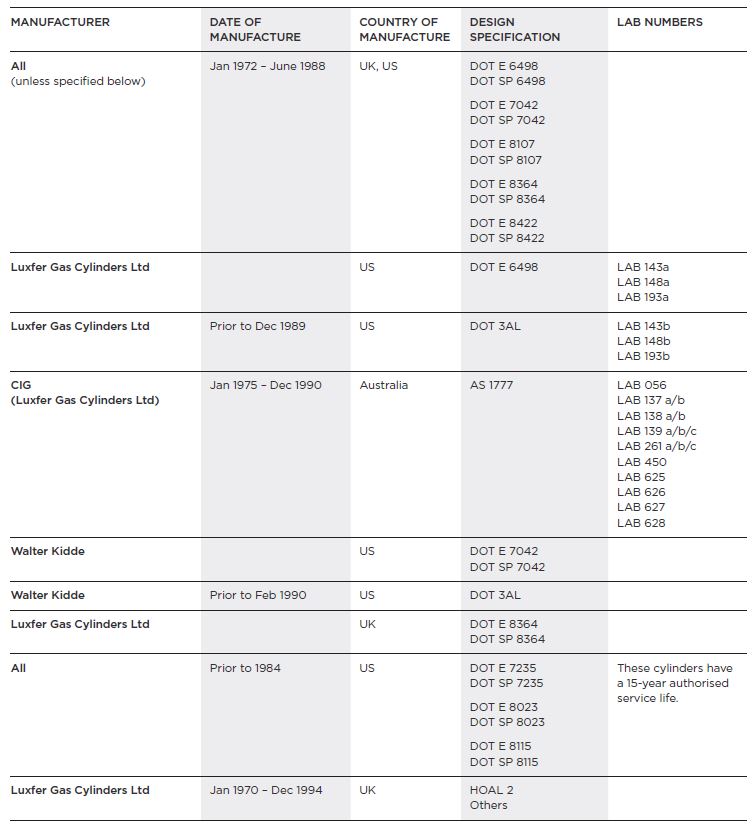